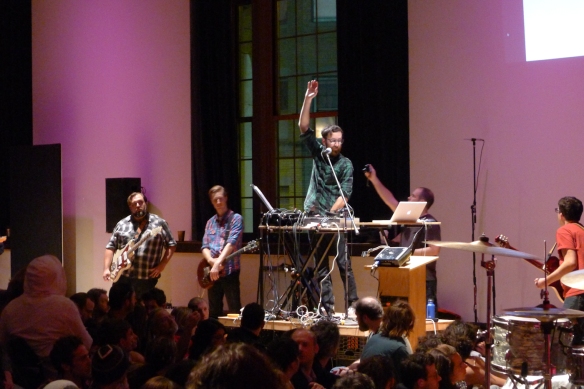 Kevin Micka has long been Boston’s most modest, capable and prolific sonic architect. Those of us who have followed his work know he’s rarely one to hype up his own. Whether it be recording and mixing some of the city’s best rock records, building microphones, repairing instruments, touring with friends’ bands, or performing amazingly and intricately as his one-man-band, Animal Hospital, Micka has always been the city’s quiet genius. In short, he is the hope and fulfillment of all that is good in our underrated town.

In early December, Micka transformed Animal Hospital from a one-man band to an epic rock orchestra. His magnum opus and greatest undertaking so far, Micka assembled a small army of friends and local luminaries to showcase his music on a grander scale. Stepping away from his instruments, Micka took on the role of conductor as 32 musicians assembled in a semi-circle at a sold-out MassArt auditorium to perform hand-picked selections from his Animal Hospital catalogue. Songs usually performed alone with loops of drums, guitars and homemade mic’d instruments, were fleshed out by 23 guitarists, seven string players and two drummers. The grandiose spectacle provided a testament to the vision of Kevin Micka, and his importance as an artist, in and beyond city limits. The following interview is an exclusive. Completed via email from his recent European tour, Micka was kind enough to answer the following questions.

Rare video footage and photos from the epic MassArt assemblage are included below.  Enjoy! 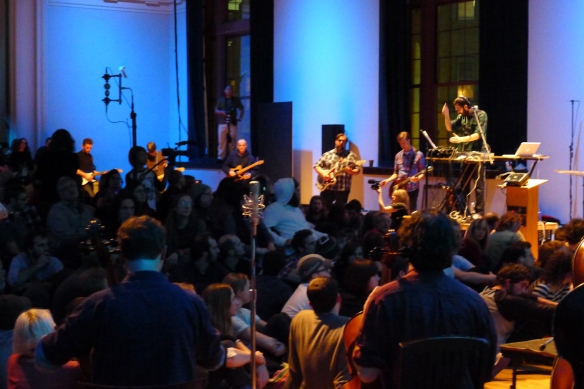 So when and why did you decide to do this large re-creation of your songs? It crossed my mind while I was working on writing and recording the album (Memory) in 2007. Earlier that year I had seen Rhys Chatham perform a newer version of “Guitar Trio” in NY with about 8-10 guitar players in a round space. I was partially surrounded by different players performing variations of the same part. The layout of the musicians was the most memorable part of the experience for me. I saw the same piece performed the next night in Boston from a stage and it really did not have the same effect on me via a more monophonic delivery. So, while recording I started imagining a version of the music I was working on in an ensemble scenario with many guitar players performing the individual parts/loops. I became more inspired to work on this idea after taking part in a 200 guitar performance of another Rhys Chatham piece enitled “A Crimson Grail” at Lincoln Center in NY in 2009. For the performance, the audience was surrounded on 3 sides by a large U-shaped formation of performers. Seeing how it all worked out logistically, and how it sounded, and the reaction I perceived from audience members really motivated me further to work on a similar idea. After touring off and on for 3 months that year, I felt I had covered as much ground as I could on my own with that material and left the ensemble idea aside until the summer of 2011. At that point I finally started to talk with musician friends about taking part and looked into venues to gain momentum thinking this would be the last thing I do with this music and I would finally follow through on what, until then, had been a casual conversation piece. 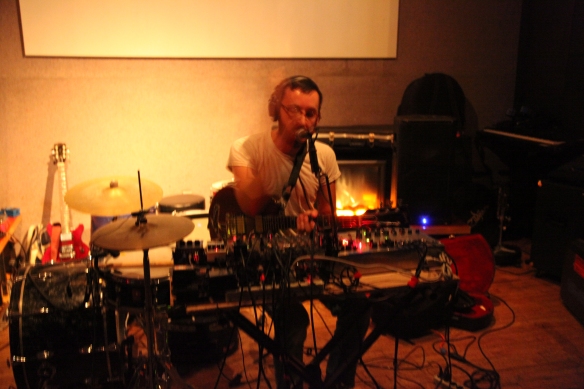 I’ve heard old Glenn Branca recordings and stuff like that. Were those an influence for you at all?

No, I never really got around to listening to Glenn Branca until last year when I felt I really needed to start gathering an impression and opinion in response to the comparison. 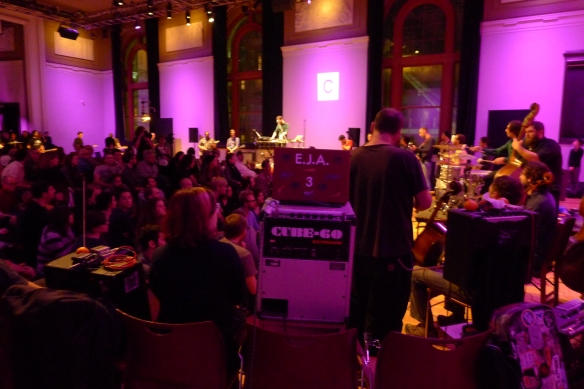 How many people did you get to play?

In the end I think it was 32 people. (One member who dropped out early was able to make it last minute)–23 guitar players, 2 drummers, 7 string players.

What was the practice process?

I am really glad we broke it up over a few weekends. All the players live in the Boston area, so I was able to organize (via mulitple Google docs) sectional rehearsals in a friend’s space that would fit about 15-20 players as well as one all-day rehearsal in the Pozen Center (at Mass Art) to get an idea of how it would sound and make adjustments.  I really had a lot of work left to do after the first weekend of rehearsals. There were still many aspects I had barely considered until we were in the middle of it. I basically went from planning to playing along with everyone to writing out my version of a musical “score” and conducting. Everyone, was also really great with suggestions and enthusiasm for putting in extra time in energy and whatever we needed to make this thing really work. The more we all worked on it, the more motivation it gave me to put as much into it as I could. 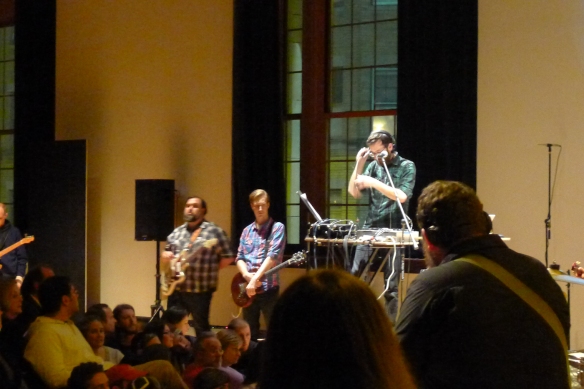 How did you pick who played?

Some people I had in mind for certain parts depending on what I knew of their style of playing. In the end I could have spent weeks working out all that, but in the end I just needed to get moving on it. I would have gone about it differently in respect to placement in the circle, but overall I think most of the assignment of parts worked out quite well. 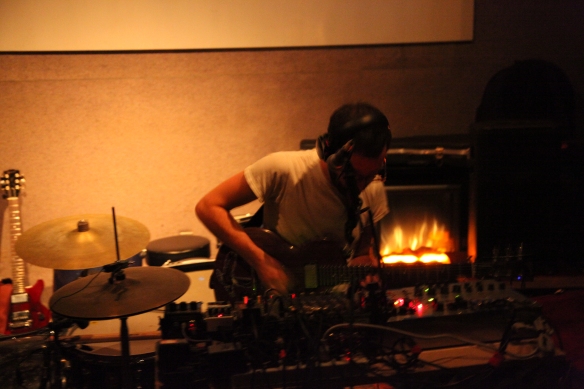 How did it feel to be on stage conducting all of those people? You’re a pretty shy and modest person from what I’ve gathered over the years. Did that make being in charge harder?

It was a really great experience, a role I never considered taking on before. In some ways it made a lot of sense. My brain accepted it in a similar way to playing solo, a similar thought process of steps to follow and execute the arrangement. The management aspect of it was also a great experience. For me as it forced to me to be more assertive and definitive with my language. All the members were straightforward in asking for direction, which it made it a really positive experience. 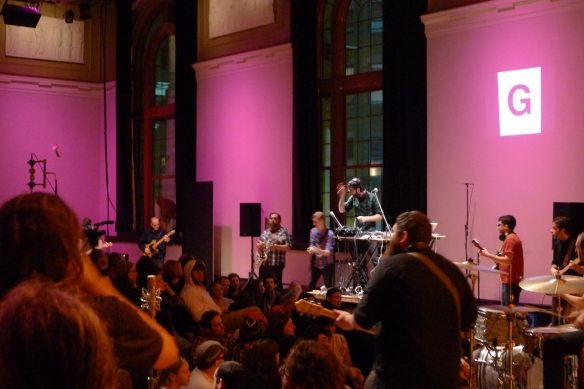 How do you compare being in a one-man band to being in a band, and more than that, being a conductor to others playing your band’s music?

It was really great to going through the process of deconstructing and analyzing all the parts for everyone and then see what they did with them. Most of the parts I had very specific ideas about. Some others were a lot more open to improvise off of, which added a whole new life to it. I never really thought about conducting before, but I kind of really enjoyed it. It has gotten me excited about the idea of doing it again and possibly trying to write with a larger ensemble in mind.

Do you find it ironic that it took that many people to carry out what you created on your own?

Not really. It can be pretty easy to get carried away with a looping pedal and just adding more and more parts. Luckily, I feel it translated well in to individual parts for players that seem somewhat unremarkable out of context, but come together well in the entire arrangement. 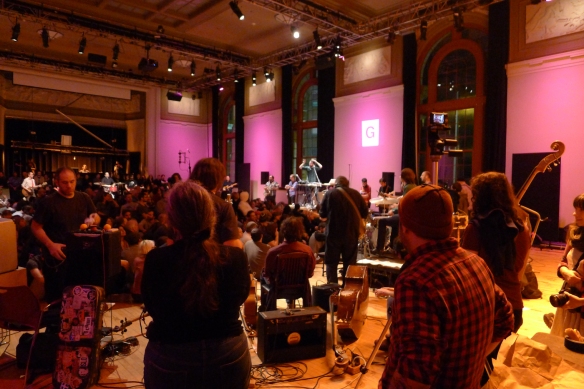 Did you find it harder conducting others than being on stage alone creating your music thru loops and live instrumentation?

Occasionally I would rehearse again on my own to get back into the mindset of playing these songs. I hadn’t played them live in over a year. It would remind me of how second nature the process had become to me– like motor memory. It was by far easier but the end goal was entirely different to me.

Do you ever want to return to being in a band where you linger in the background and you aren’t the center of all the attention?

I will play in friend’s bands in a hired gun type of role, which I enjoy from time to time– especially to stay in the mindset of a collaborative and communicative type of environment. I think that is healthy for me from time to time. I also have been playing drums and other instruments as a member of Neptune for the past 2 years, which has worked well for me in contrast to my usual writing in solitude.

What’s next for Kevin Micka and/or Animal Hospital?

Neptune just released a record and are playing shows in Europe for the first time in a couple of years. After this I plan to record some new Animal Hospital material that I have been playing out with for the last year or so.  There also has been some planning to do the ensemble again possibly this summer or next winter. 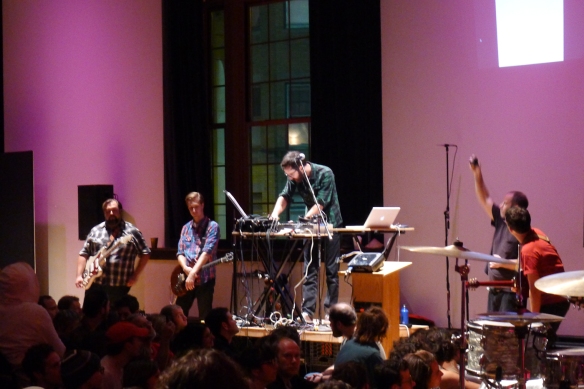 I am still working part time and freelance fixing guitar amps, mixers and other music-related electronics and still recording in different makeshift studios, both of which I still really enjoy. More recently I have been more active in building instruments and other sound installation-type projects with Neptune and a guy named Eli Keszler which has been a great new learning experience. We recently finished building a small 4-string, lap steel-like guitar with DC motors spinning on and off, controlled by an Arduino micro controller that Eli took on tour with him as accompaniment. 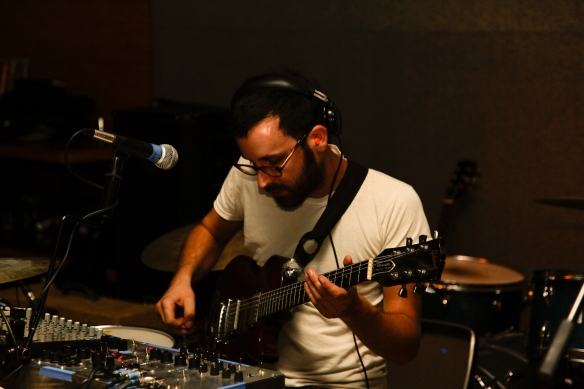 Will you be touring alone or in a project like this anytime soon or do you prefer the every now-and-then local show?

For now I need to really focus on recording the new material. I do have plans to head out to Chicago for a wedding in June and play some shows along the way and back. Other than that, no plans to tour solo until a new record is released.

Who are some of your favorite one-man-bands?

An early inspiration was Tyondai Braxton, which my old band (the Common Cold) played with a few times. I really liked the organic aspect he brought to performing with loops. He often presented it in a way that made you less aware of the repeating aspect of the music. Dosh is someone I came across a bit later and have enjoyed listening to. His set up was initially more similar to mine as far as drums go. Martin comes from a very organic foundation with all of his sounds. I really enjoy his arrangements and his drumming.

Which do you enjoy more: being a contributor or having autonomy?

I enjoy both. I feel it is healthy to keep my mind active in both situations. So I can remember how to listen and play off others. I do enjoy the extremely personal aspect of working alone as well. 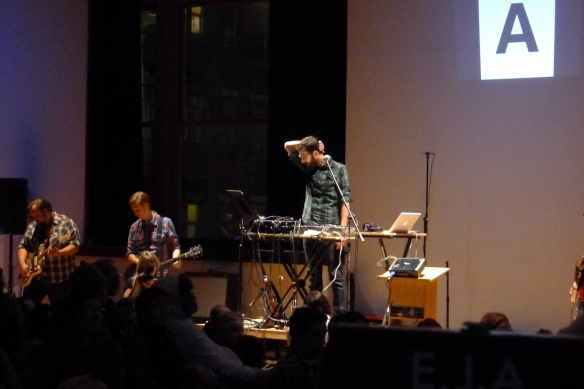 What’s the ultimate goal? Would you ever try this again? I have been talking with people about putting it on again in Boston at some point. Financially and logistically it is a little tricky, but hopefully we will work something out for the summer. I would like to look into doing it outside of Boston as well, Possibly in NY or Montreal maybe.